A short biography of Eirinaios

He studied at the Theological School of the University of Athens and he worked as a teacher in high schools in Chania prefecture.

In 1943 he was arrested by the German forces in Greece, due to his speeches for resistance and freedom at the Church mass, but was saved by the Bishop of Apokoronas.

In 1946 he was consecrated a deacon and received the name Eirinaios and in 1957 he became Metropolitan Bishop of Kissamos. 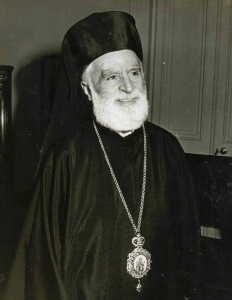 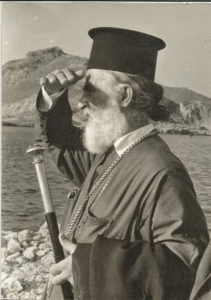 His bright mind, his love for arts and culture worked like a lighthouse in the region, encouraging people to be educated and well nurtured. He established numerous foundations and philanthropic associations, schools and craft academies, cultural associations and many more clubs and benefit societies. His writing chare has also been significant and impressive.

From 1972-1980 Eirinaios Galanakis undertook a mission to re-establish and rejuvenate the Archbishopy in Germany, thus he worked in this country, establishing new Orthodox Churches and Archbishopies in Bonne and other regions and published a monthly journal for the Greek immigrants in Germany. He also managed to introduce Greek Theology in German Universities, and assisted the Greek workers and immigrants in Germany both spiritually and practically.

In 1981 he returned to Crete to continue his work and deeds there until 2005 when he resigned due to advanced age.

With his presence he contributed to the establishment and operation of the Orthodox Academy of Crete.
He wrote dozens of books, while in the area of ​​Kissamos the museum Eirinaios Galanakis has been founded and exhibits his personal objects. The opening was officiated by Ecumenical Patriarch Bartholomew during his visit to Kissamos, on Oct. 6, 2009.

Nowadays you can find a square named Eirinaios Galanakis in the city center, next to the city hall. 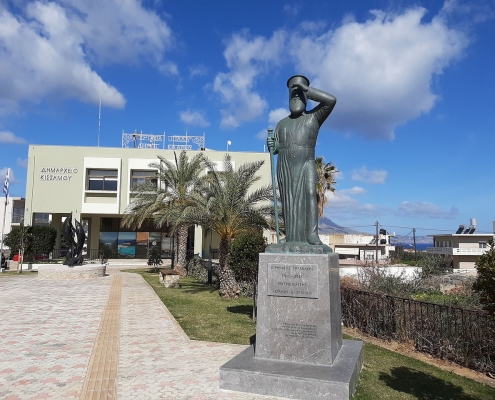 This is a local block in his memory (In Greek). ( https://irineos.blogspot.com/ )

In Greek, no subtitles.

This site uses cookies. By continuing to browse the site, you are agreeing to our use of cookies.

We may request cookies to be set on your device. We use cookies to let us know when you visit our websites, how you interact with us, to enrich your user experience, and to customize your relationship with our website.

Click on the different category headings to find out more. You can also change some of your preferences. Note that blocking some types of cookies may impact your experience on our websites and the services we are able to offer.

These cookies are strictly necessary to provide you with services available through our website and to use some of its features.

Because these cookies are strictly necessary to deliver the website, refuseing them will have impact how our site functions. You always can block or delete cookies by changing your browser settings and force blocking all cookies on this website. But this will always prompt you to accept/refuse cookies when revisiting our site.

We fully respect if you want to refuse cookies but to avoid asking you again and again kindly allow us to store a cookie for that. You are free to opt out any time or opt in for other cookies to get a better experience. If you refuse cookies we will remove all set cookies in our domain.

We provide you with a list of stored cookies on your computer in our domain so you can check what we stored. Due to security reasons we are not able to show or modify cookies from other domains. You can check these in your browser security settings.

These cookies collect information that is used either in aggregate form to help us understand how our website is being used or how effective our marketing campaigns are, or to help us customize our website and application for you in order to enhance your experience.

If you do not want that we track your visit to our site you can disable tracking in your browser here:

We also use different external services like Google Webfonts, Google Maps, and external Video providers. Since these providers may collect personal data like your IP address we allow you to block them here. Please be aware that this might heavily reduce the functionality and appearance of our site. Changes will take effect once you reload the page.

The following cookies are also needed - You can choose if you want to allow them: