The old projector has been inactive for the past 24 years. The seats though, still have the same brown color. If you could visit the place you would actually feel the memories it represents. Entire generations grew up visiting ‘Cine Astor’ in Kissamos. It was the place that entertained the whole town of Kissamos. It is Giannis Stamatakis’ place, a man who is well known among locals as ‘Stamatogiannis’. He was the one who was responsible for the tickets, he was the one in charge of how the place worked, he made the projection, he was actually responsible for everything.
The cinema opened its gates in 1957. ‘Stamatogiannis’ built the place and he was initially planning to open two different shops in the building. He changed his mind and he decided , in one night, to make the first cinema in Kissamos and also one of the first in the prefecture of Chania. His exact words are: ‘I was always thinking in a different way, I was too daring for my age. It’s not only the cinema. After that I made an estate agency and also a recording studio.’ At first he was just the owner of the place but not responsible for the cinema. He had rented the place to Polakis, a man from Chania, until 1967. Then, their contract expired and Mr Stamatakis took a loan from the local bank in order to pay 265.000 drachmas for a new projector and new seats so as to rebuild the whole place.

‘Too many people were visiting the place. It was overcrowded day and night. On Sundays, the cinema was open from 14.00 at midday until late at night’.
There were so many movies that so many people wanted to watch. In those days there were not many opportunities for having fun. Going to the cinema was a way out.
‘I remember a movie with Ksanthopoulos (seal of God) or ‘El paso’ movie. It was shown 3 times a day. The cinema was so successful and the movies seemed so real on those days. I can remember people bending or lying down to avoid the crashing of an airplane shown in the film. ‘There were –of course- many unexpected situations with people falling asleep and snoring, bothering others’ or ‘when I locked the doors after the end of the film and one guest had fallen asleep in the last seats, so he stayed there for the whole night’ ‘Stamatogiannis’ recounts.
These and similar events kept happening in the cinema of Kissamos until 1970. Then, the television set entered people’s houses and this led to a decrease of 50% of the people who went to the cinema. In the late 80s the video appeared and there was another 30% decrease. The cinema closed down in August, 1990. ‘It was the last movie ever. We couldn’t survive as a business any more. The cinema was financially suffering for some years but we loved it and we did everything possible to keep it open. Finally, we didn’t make it.’ The owner adds.

For some people, ‘Cine Astor’ served another purpose that was connected to religion.

‘Cine astor’ was also open during summertime. It was an open-air cinema, and every night 20 or 30 kids were gathering on a roof nearby to watch the movie for free. ‘I was thinking that they are poor kids so I was letting them do what they wanted. When the cinema was not full of people I was also inviting them to come in for free, without paying for a ticket. One day, during the projection, a lady came. She told me that one of the kids on the roof was throwing little stones to her daughter. I went up and when they realized I was angry they started running so I managed to catch one of them from his jacket. We was fast and he managed to take off his jacket and run away. I was left with his jacket in my hands, in which I found his student identity card. I immediately called the high school manager and told him about the students. I also told him that I had one of his students’ identity card. He told me to go to the school the very next day. I couldn’t sleep for the whole night. I was thinking that if I went to school, that could have been harmful to the student, so I decided not to do it. The school manager called me the next day to ask me why I hadn’t shown up to and I told him that I had changed my mind. I was not going to ruin the kid’s life, I told him. Those days were more difficult. The years went by and 15-20 years later, someone saw me at the bank and was greeting me. I couldn’t identify him, even after talking to him. He was that student from the roof. He had been in Australia for some years and he had come back to Crete to build a hotel in Maleme. He thanked me for not going to school on that day with his identity card and we became good friends ’, Stamatogiannis remembers.

A plethora of people working in the theatre sector, had also visited the place. ‘It was only Aliki Vougiouklaki, an extremely famous Greek actress of that time, that had not come to our cinema. When the Greek actor Giannis Voglis was here, people smashed my glass partition on the front side. When the actor Berlekis was here, all women from Kissamos visited cine Astor. Kaiti Papanika was also here for 3 or 4 times when Stavridis came. They told me to watch out for him. He was a huge fan of Olympiakos football team, and if someone told anything against his favourite the team he would leave. He was so obsessed with Olympiakos football team that I was nervous the whole time because it was too easy for someone to ruin the show. Those were the times, the old cinema owner concludes. 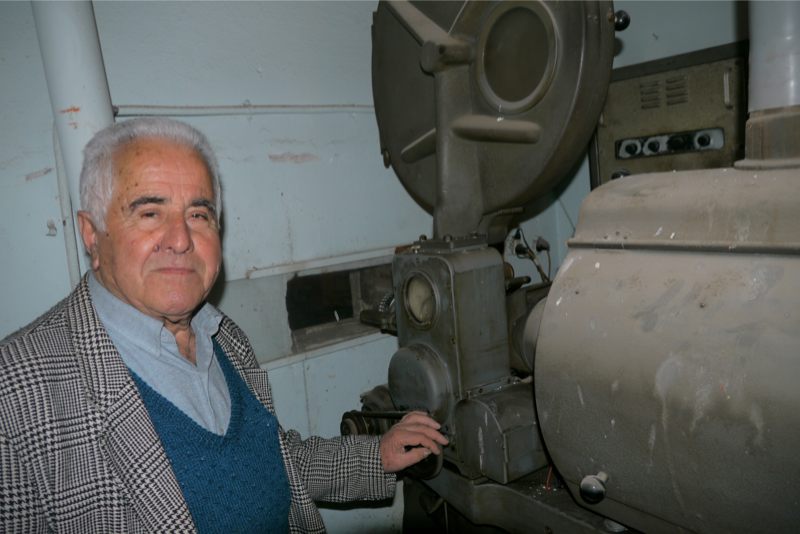 Translated in English by: Inkissamos.gr

A movie for Cine Astor. Made by high school of Kissamos and ChaniaFilmFestival. (GR)

This site uses cookies. By continuing to browse the site, you are agreeing to our use of cookies.

We may request cookies to be set on your device. We use cookies to let us know when you visit our websites, how you interact with us, to enrich your user experience, and to customize your relationship with our website.

Click on the different category headings to find out more. You can also change some of your preferences. Note that blocking some types of cookies may impact your experience on our websites and the services we are able to offer.

These cookies are strictly necessary to provide you with services available through our website and to use some of its features.

Because these cookies are strictly necessary to deliver the website, refuseing them will have impact how our site functions. You always can block or delete cookies by changing your browser settings and force blocking all cookies on this website. But this will always prompt you to accept/refuse cookies when revisiting our site.

We fully respect if you want to refuse cookies but to avoid asking you again and again kindly allow us to store a cookie for that. You are free to opt out any time or opt in for other cookies to get a better experience. If you refuse cookies we will remove all set cookies in our domain.

We provide you with a list of stored cookies on your computer in our domain so you can check what we stored. Due to security reasons we are not able to show or modify cookies from other domains. You can check these in your browser security settings.

These cookies collect information that is used either in aggregate form to help us understand how our website is being used or how effective our marketing campaigns are, or to help us customize our website and application for you in order to enhance your experience.

If you do not want that we track your visit to our site you can disable tracking in your browser here:

We also use different external services like Google Webfonts, Google Maps, and external Video providers. Since these providers may collect personal data like your IP address we allow you to block them here. Please be aware that this might heavily reduce the functionality and appearance of our site. Changes will take effect once you reload the page.

The following cookies are also needed - You can choose if you want to allow them: